A promotion for Earth Day 2020 Boston by students from Newton South High School. Let’s  join them as we celebrate the start Earth Week tomorrow. 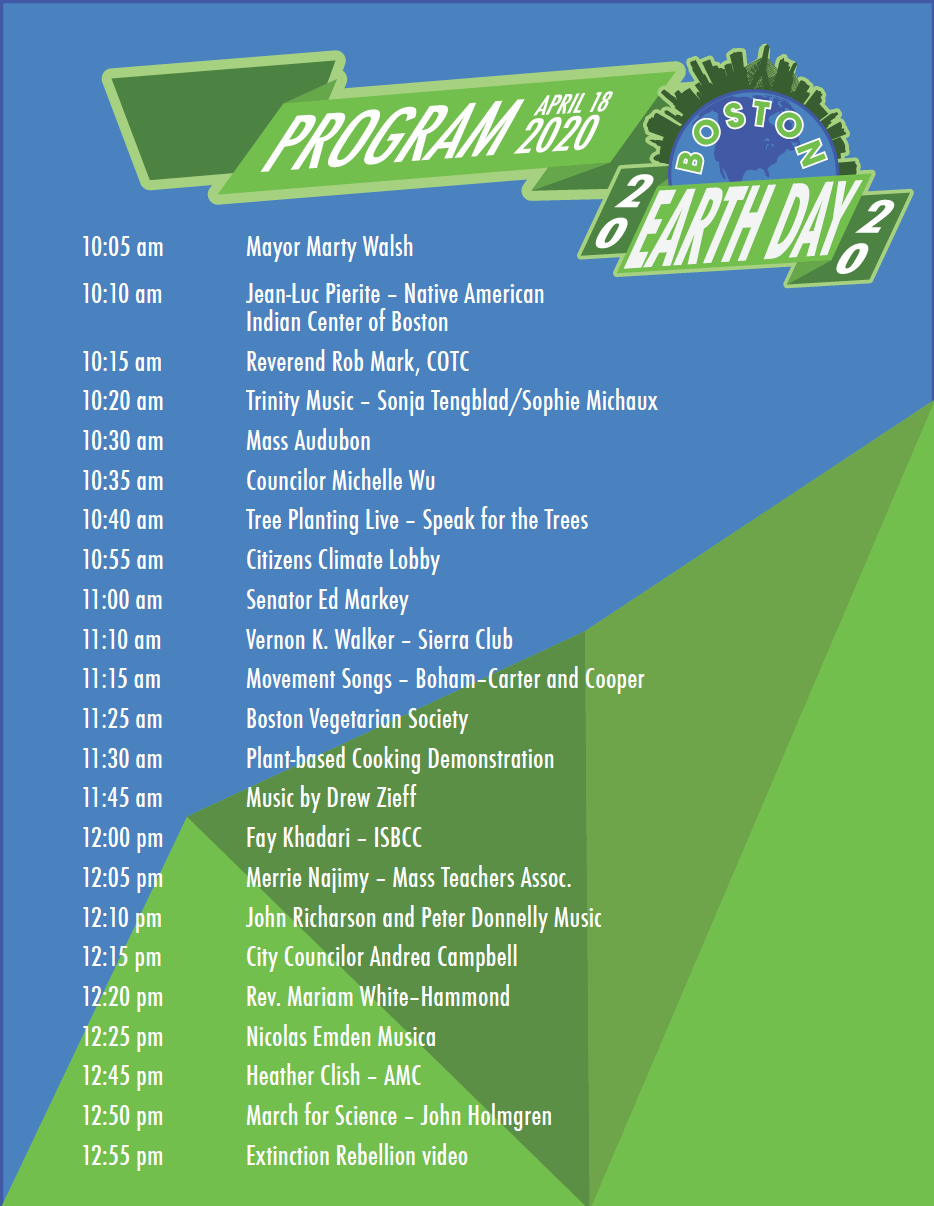 While the climate crisis is a no joking matter, we can all use a little humor to keep our spirits up. As a lighthearted activity to celebrate the 50th Anniversary of Earth Day on April 22, Green Newton is proposing that we all beautify our streets with “Sidewalk Chalk Climate Jokes”. This is a great way to introduce Green Newton’s new Take Action!  tool and encourage our community to take action on climate change.

Take Action! draws attention to the actions that each Newton resident can take to lower their impact on climate. With almost 60% of greenhouse gases coming from household energy and cars, our personal actions really matter! Sign in and check off the actions you’ve already taken. Make a list of “To dos” and get to it. Challenge others to take action with Green Newton!

Help us get the word out! Here’s what to do:

Have fun and Take Action!

In honor of Green Newton’s 30th Anniversary, we invite all high school students who live in Newton to write essays to voice their concerns and inspire others to make a difference by suggesting solutions that can benefit our environment.

The essay topic may be chosen from the list below or it can be an environmental topic of your choice. Students can write how they and others they know are learning to cope with the current challenges we face, while taking positive steps at home and in our community to conserve energy and protect our natural resources.

Selected essays (300 words max) will be published on the Green Newton website, in our e-news bulletins, and on the GN School Connections website. Green Newton reviewers will determine on a weekly basis how many essays will be selected for publication.

There will be a raffle drawing on a date yet to be determined, in which all students who submit essays will be eligible to receive one of two $50 gift certificate prizes to use at a local shop or restaurant of their choice.

How to submit the essay? Send it by email by April 27 to [email protected]. Please include a title, your full name, school and grade.

For more information, please email us at [email protected]

Last month Green Newton has declared support for Juliana v. United States.  If you would also like to support those extraordinary young people, please read their message below and act today 🙂

We need your help TODAY!

Zero Hour, together with the National Children’s Campaign, is leading a nationwide drive to support the 21 Juliana youth plaintiffs, asking youth to add their names in support of a new brief on behalf of young people and women. This amicus, or “friend of the court” brief will be filed with the Ninth Circuit Court of Appeals this Thursday, March 12, 2020 on behalf of the League of Women Voters, Zero Hour, and the National Children’s Campaign. The brief will call upon the Court to grant a rehearing of the Juliana plaintiffs’ case and allow their voices to be heard in open court at trial.

Please visit joinjuliana.info TODAY to add your name to the growing list of young people supporting this youth and women led brief (or, if you’re an adult, please share this link with the young people in your life). YOU can tell our Nation’s courts that they have a duty to protect our constitutional right to a stable climate!

Message from Levi, one of the 21 Juliana v. US plaintiffs:

The 50th Earth Day is coming up on April 22, and this year’s theme is “Climate Action”. THE GREEN TEAM’s Climate Change Scorecard Activity and Scorecard is a great way to engage students in understanding more about how their actions can help slow climate change. Students can use the cards to keep track of their environmental actions over a week’s time and accumulate points for reducing their energy consumption and counteracting pollution. Taking the bus to school, eating less meat, and making a compost pile are all ways to earn points!

Take the Earth Day 2020 Pledge. The United Nations says we need to reduce emissions by 7% a year over the next 10 years to avert severe climate consequences.

Take the pledge to be an environmental voter in 2020. Vote on March 3rd in the Massachusetts Presidential Primary. Then vote in the general election – Tuesday, November 3rd. Send a strong message that action on climate must happen this year. 2020 is the year to declare a climate emergency.

Join a climate action team with other educators and tell us what kind of action you want to take. Are you interested in teaching about climate change, partnerships with other organizations or discussing ways to include climate concerns in your labor negotiations? We have a place for you! Follow this link to join us.

Get involved in the national movement: https://www.earthday.org/earthday/countdown-to-2020/

WHAT YOU CAN DO

WHAT CAN BE DONE AT HOME

Home heating and electricity account for a large portion of fossil fuel use. Talk to others at home about:

Green Newton has signed a declaration of support for Juliana v. United States.

CO₂ levels in the atmosphere are the highest in human history, having exceeded 400 parts per million (ppm) for the first time in 1 million years. This human-made increase in atmospheric carbon dioxide levels has caused large-scale climate change, profoundly altering the planet on which we live. Climate change is causing ocean warming and acidification, and the warming of the Earth’s surface, leading to rising seas, more extreme weather events and flooding, heat waves and droughts, more intense and destructive wildfires, disrupted ecosystems and agriculture, more disease and other health threats, famine, conflict, and loss of human life.

The scientific prescription for avoiding the worst effects of climate change mandates returning atmospheric levels of CO₂ to below 350 ppm by the year 2100, requiring immediate and swift reductions in CO₂ emissions globally and an overall reduction to almost zero by 2050, in addition to protecting soils and forests to sequester more carbon. The most critical transformations must happen over the next decade. Any delay will make it more difficult or impossible to meet a safe target; thus, urgent and substantial reductions in CO₂ emissions are critical.

In the landmark constitutional climate case known as Juliana v. United States, 21 American youth filed a lawsuit against the United States government for taking actions that cause climate disruption in violation of the youths’ and future generations’ constitutional rights to life, liberty and property, and equal protection under the law, and for violating its duty under the Public Trust Doctrine by failing to protect the atmosphere for all generations.

If the Juliana youth plaintiffs are successful in their case, the federal government will be ordered to create and implement a science-based national Climate Recovery Plan designed to phase out the United States’ fossil fuel energy system and emissions and draw down excess atmospheric CO₂ in line with the 350 ppm by 2100 prescription.

Support from organizations, congregations, schools, municipalities and businesses from across the United States is critically needed as we envision a society free of fossil fuels and the national security and public health and safety impacts of climate change.

THEREFORE, Green Newton declares support for the 21 Juliana v. U.S. youth plaintiffs, the fundamental constitutional rights they seek to protect, and the creation and implementation of a science-based national Climate Recovery Plan that would allow a just transition away from a fossil fuel-based energy system.

North students organized and marched to Newton City Hall and joined the Boston Climate Strike on Friday, Dec. 6. Students went to downtown Boston and the statehouse to protest.

“The single most important thing students can do at the local level is to email their city councilors to express support for climate action policies and to show up to city council meetings and hearings,” said senior Dina Gorelik, a member of the Climate Advocacy Club, which organized the Newton Climate Strike.

Gorelik added that the goal of the climate strike was to raise awareness surrounding climate change and to make the club’s goals known to the Mayor Ruthanne Fuller.

Students missed school to encourage legislators to take immediate action against climate change and fight for a Massachusetts Green New Deal. According to a Massachusetts Climate Strike press release, protestors from around the state met at Copley Square and marched to the statehouse, pushing for bills advocating for the elimination of fossil fuels and declaring a Climate Emergency.

This is the second climate strike of the school year, following the last on Sept. 20.